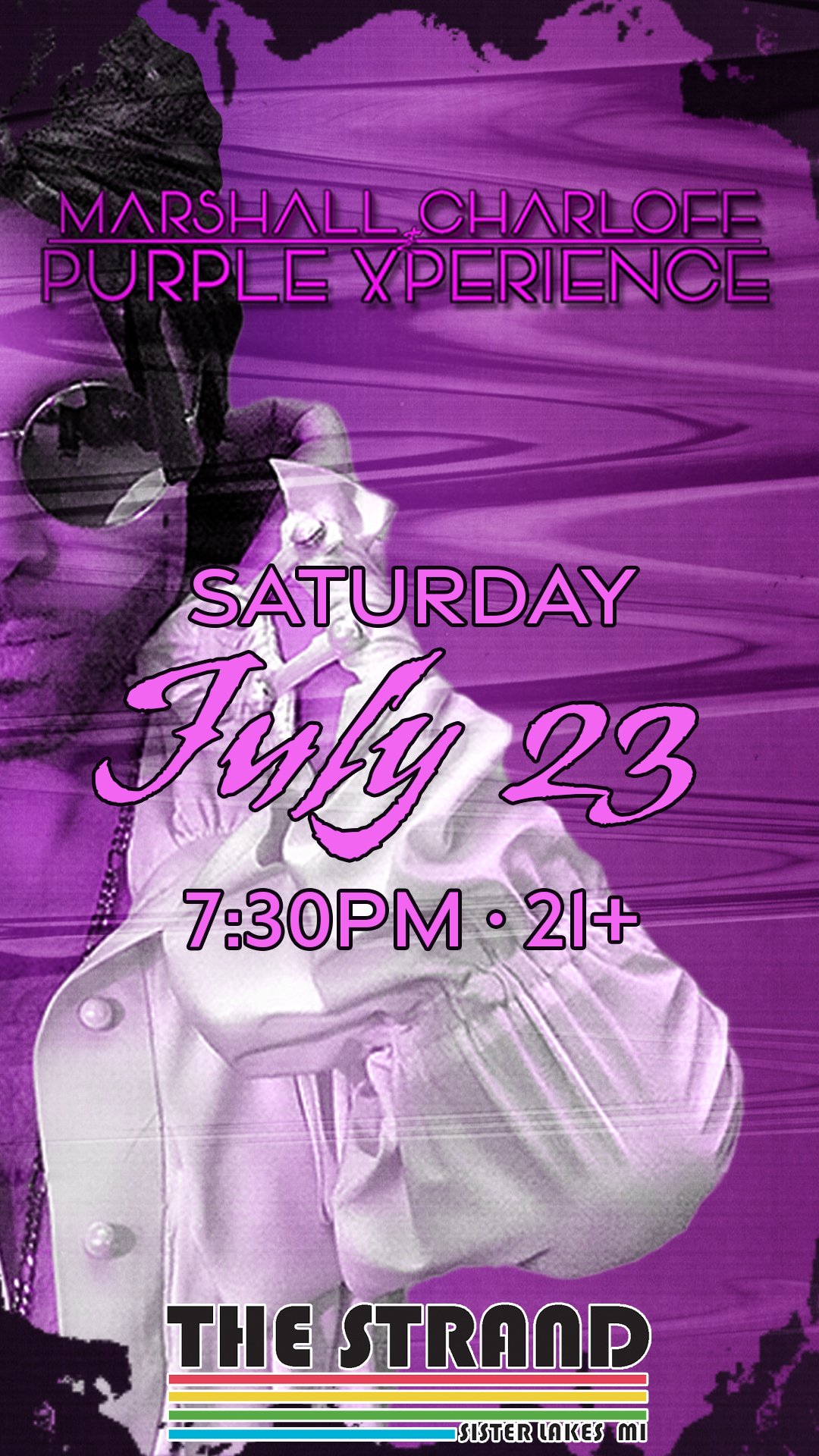 Marshall Charloff and The Purple Xperience at The Strand

*Tickets at the door will be very limited so purchase now if you plan on coming.

**Because of the popularity of the show and spacing, bringing chairs will be allowed but not encouraged. There will not be much room for chairs and their locations may be limited.

About:
The Purple Xperience is a five-piece group hailing from Prince’s birthplace, Minneapolis, MN. They have been touring around the country since it’s inception in 2011 by Dr. Fink and front-man Marshall Charloff – bringing the greatest and most authentic production of Prince and The Revolution in the world to audiences of all generations. Since 2011 Purple Xperience has entertained well over 300 thousand fans and has shared the bill with The Time, Cameo, Fetty Wap, Gin Blossoms, Atlanta Rhythm section, and Cheap Trick.
Lead singer, Marshall Charloff, not only styles the magic of Prince’s talent in an uncannily unmatched fashion with his appearance, vocal imitation, and multi-instrumental capacity on guitar and piano, but Marshall performs nationwide fronting world-class symphonies in most major cities in the US and Canada. Recently, Marshall Charloff teamed up with the famous jazzman Marcus Anderson (New Power Generation, 3rd Eye Girl sax player) in Raleigh, NC to perform with the North Carolina Symphony Orchestra.
Marshall recorded with Prince on the album 94 East, (where Marshall plays both, keyboards and bass guitar and Prince is on lead vocals). Pepe Willie, who discovered Marshall, was also responsible for getting Prince’s career up and running. In 2009, Marshall teamed up with Doctor Fink from Prince and the Revolution and Pepe Willie from the band 94 East to perform at the Rock and Roll Hall of Fame benefit concert (On the same bill were Cheap Trick, Atlanta Rhythm Section, and the Georgia Satellites).
Marshall Charloff is a celebrated producer and recording artist. He produced, wrote and recorded for the Multi Platinum and Grammy award winning Commodores. Produced, Wrote and recorded for Hall of Fame Inductee Little Anthony (Little Anthony and the Imperials). His skills paved the way for Marshmallow Fields: a 1990s production team consisting of Marshall, Grammy winner John Fields (The Jonas Brothers, Miley Cyrus, and Switchfoot), and Steven “Funkytown” Greenberg and their single charted on the Billboard Top 100 dance charts and is still in rotation amongst DJs around the country. Marshall is also an inductee in the Mid America Music Hall Of Fame as a member of the band Westside.
***Only purchase tickets directly from our website or the event ticket link. Do not purchase tickets from someone reselling on facebook- it’s a scam.
#prince #purplerain #thestrandbrewery